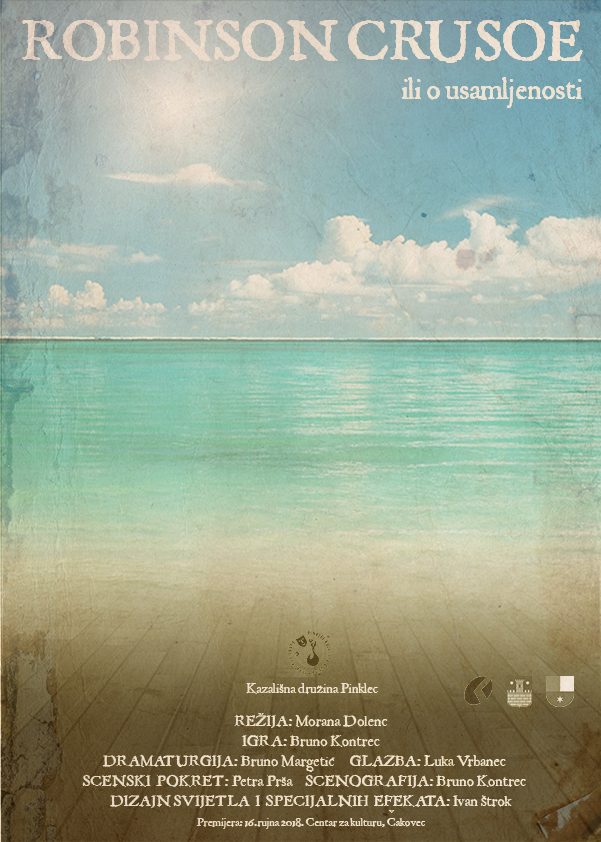 The performance of Robinson Crusoe was created according to the well-known novel by Daniel Defoe, which features a narrative about the troubled spirit of Robinson’s youth and his fatal journey to sea, shipwreck and life on an uninhabited island in the middle of the ocean. Robinson Crusoe’s performance period of 28 years solitary on the island puts itself in 45 minutes of solitude on the scene, as we have found the perfect form for this template in the monodrama.

Just in the disproportion of the time and duration shown, and the fact that Robinson’s content is almost commonplace and largely known to viewers, we have recognized the opportunity for interesting and striking events and fragments from Robinson’s life to be a necessary minimum for a unique recognition of the original, but also for certain time- the interval is displayed symbolically by introducing our own codes to which the audience agrees with ease. Raising the elements of the play to the symbolic level we recognized Robinson’s power and helplessness on a desolate island, so we were forced to innovate and design our codes, to “repeat the civilizational reaches” in the scene expression and communicate the content to the audience.

Intended as a monodrama (because monodrama is the survival of the actor on the scene), the play was created through the complex collaboration of a diverse author team. Working pods “or solitude” proved to be both accurate and inaccurate at Robinson, we discovered a lot more than solitude but also confirmed the horror of his isolation.

The sceneries are made of wood, sand, iron, water, ropes … materials and motifs that are very Robinson’s, but we tried to find some other beauty in them, design new ways to look at them, use them in the wrong way to serve our Robinson to survive on the stage, on its desolate island, and eventually return to civilization, that is, sense.

You can find out more about which cookies we are using or switch them off in settings.